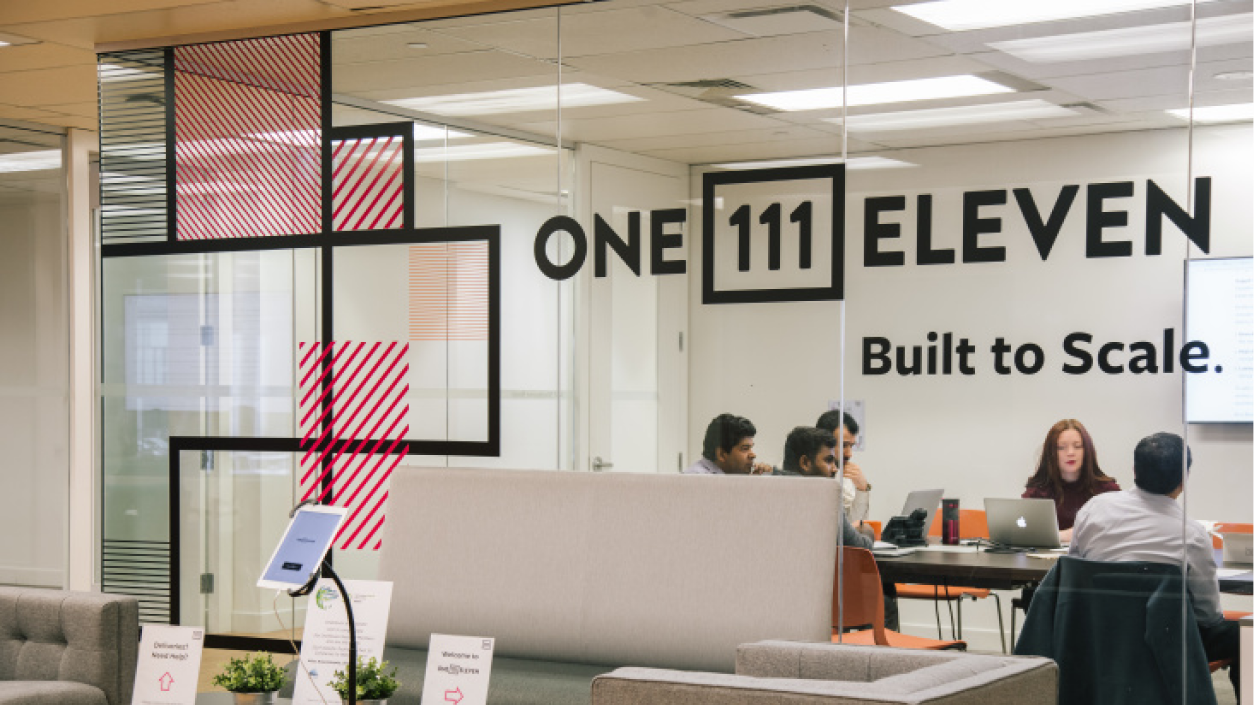 OneEleven is a unique coworking space designed for scaling technology companies raising their Series A and B equipped with open concept seating, private offices, event spaces, and much more. Surrounded by fellow tech startups, OneEleven is working to create a community of innovators in downtown Toronto. As the Director of Operations and Technology, Mel Heeney oversees about 1200 square feet and the success of those 1400 people.

Mel and her team manage the OneEleven facilities so its members can focus on their growth journey, whether it's funding, hiring, or any of the pain points associated with a fluctuating company.

"My main role here is very much behind the scenes managing the experience that all of our members have here, so that includes everything from overseeing their interaction within the physical spaces to ensuring the best possible day-to-day functionality and that the tools within the space are working and simple to use.”

OneEleven exists to make growing their members companies easier, as Mel puts it. But with such a large and growing membership base, it can be tough to find the right tech to help them do that. In an area where privacy and security for each company is so important, Mel and her team are constantly trying to figure out ways to bring in the right tech stack without overcomplicating their members day-to-day workflow.

"One of the challenges of creating a community of different companies is that you need software tools that allow multiple people to use them. This year alone we had over 500 new people in the space. Any system you’re onboarding needs to be intuitive. Booking meeting rooms shouldn’t be that difficult but when you deal with the back end, it does get difficult.”

With so many different companies sharing conference rooms, OneEleven quickly realized their current room scheduling software wasn’t going to scale as they grew. Double bookings became a constant issue, with different organizations butting heads trying to secure a conference room, ultimately affecting OneEleven’s workplace culture. That, plus a lack of technical support from their current solution, made issues like overbooked rooms a glaring problem.

“We’d always see two people from different companies standing in front of the same room both saying, ‘I have this room booked.’ One might have an interview while another has an important one-on-one. Both are important day-to-day activities that shouldn’t be difficult to complete.”

By nature, coworking spaces bring a ton of different organizations under one roof. That being said, it’s the coworking space’s responsibility to make their workplace a space hundreds can co-exist and work productively. And as a key player in Toronto’s tech scene, OneEleven needed a solution fast.

After doing extensive research on what conference room scheduling systems were out there, Mel and her team landed on Robin.

"Robin made something that had been previously very difficult, easy, and their support was also something we really relied on. Previous solutions had a very slow turnaround time, whether it was because they didn't have a large support team or they didn't see us as the kind of big players we actually are. Robin rectified that.”

A workplace tool that scales with rapid coworking space growth

One of OneEleven’s main requirements was to find a tool that could keep up with the rapid growth they experience each year as new companies and members join every single week. Using Robin, Mel knows each company will feel supported and empowered to get their best work done as they grow and require more resources.

Once implemented, OneEleven members no longer had to worry about how to book resources or where they were and could instead focus on their internal company goals.

“We went with Robin because we needed a tool that would allow us to scale. We needed someone who was going to support us through set up and beyond. It's always difficult when you have a new solution coming into play and there's no testing environment. You have to hope it works. With Robin, it was different. They walked us through the entire process which made rolling it out a huge success.”

A smart conference room scheduling solution that eliminates the “noise”

Before finding the best solution for their workplace, OneEleven was constantly dealing with conference room theft, lack of visibility into what resources were available and when, and unused space. Once they implemented Robin, those issues disappeared immediately.

“Meeting rooms used to be something that we did get a lot of complaints about and it stopped. Robin has the filter tools so people weren’t showing up to rooms that were too small. It has images of rooms so you actually see the room you’ll be walking up to. It just kind of eliminated all of the noise.”

With smart scheduling recommendations using Robin’s Google Calendar plugin, space booking is a seamless process. The risk of bringing new software to any organization is that employees won’t use it if they look at it as an “extra step”. Robin integrates with and works alongside the calendar OneEleven members use every single day, with no extra login required, which cut change management time in half and made adoption immediate. By adding space resources, amenities, capacity, and type to each space, Robin suggests the best space based on the meeting an employee is trying to schedule.

“With Robin being able to just drop right into your Google Calendar, you're not asking very much of people to get them to use it."

Using group and permission settings in Robin’s scheduling tool, Mel and her team can easily manage different companies and the resources available to each by separating them into their own groups. If managers at specific companies require extra visibility into their team’s day-to-day, Mel can assign roles that correspond with those responsibilities. With these settings, the OneEleven team can dive even deeper to understand how each company uses the space and adjust resources accordingly.

Support that goes above and beyond when workplace issues arise

One of the things that stuck out the most when Mel and her team started using Robin was the support they received during set up, after implementation, and now should any issue or question come up.

“We had used a couple of other software platforms previously to book rooms and their support was either really slow to get back to us or we would have something that we viewed as urgent that they didn't. Robin's support really stepped it up. They were always there. Quick response times and resolution times were just as quick, which was really important when you have so many people using a system.”

When there’s an issue with booking conference rooms at OneEleven, everyone feels it. It’s on Mel’s operations team to immediately identify and solve it so their members have every resource they need to be successful. As Mel puts it, the only stresses tech companies experience at OneEleven should be completely unrelated to the resources the coworking space provides.

"The scariest part of transitioning to any new software is that you don't know if it's going to work. Robin has the confidence to assure you along that entire way that they have it under control, they know what they're doing, and it's going to be the smoothest transition that you could possibly hope for. It just makes that resource that everyone on your team needs to use so much simpler."

Workplace analytics that uncover new opportunities to advance the space

With a growing headcount comes more square feet needed and in the summer of 2018, OneEleven underwent an office expansion that nearly doubled their total square feet across two floors.

In the team’s original plans, the second floor would be outfitted with a majority of large conference rooms because they assumed that’s what  their companies needed most. After looking at Robin’s workplace analytics, they discovered quite the opposite.

“We used the Robin analytics to figure out, "What size rooms do we actually need?" We thought that since we’ll have larger companies, that obviously would mean we need 15-20 person meeting rooms. When we had to look at the data and what people actually wanted, it was more focus rooms, those two to four-person rooms, which wouldn't have been the path we had gone down.”

Before taking a look at the data, Mel and her team didn’t think they had a use case for office space utilization software. After taking a look, they now know it’s a piece of information they’ll continue to refer back to anytime they need to re-evaluate current space or expand to new areas.

After the initial reveal of the second floor, everyone was “over the roof” excited, according to Mel. Private space wasn’t a direct request from OneEleven members, but once they saw the new space they were thrilled to see how many focus rooms were added. “They felt like we listened to them without actually listening to them,” said Mel.

As OneEleven continues to grow their community of tech startups and expand their coworking space, they plan to take advantage of Robin’s workplace analytics to continually improve the facility and resources they provide. Mel is confident Robin is the tool that’ll scale alongside her team as they grow, and support them if issues arise.

With the Google Calendar plugin being a fan favorite across the coworking space, the topic of office visibility is constantly on OneEleven employees’ minds. Using digital signage to display their floor plan, Mel sees a future where everyone will feel even more empowered to navigate and use the office, both unplanned and on the fly.