The State of the Office: Amenities 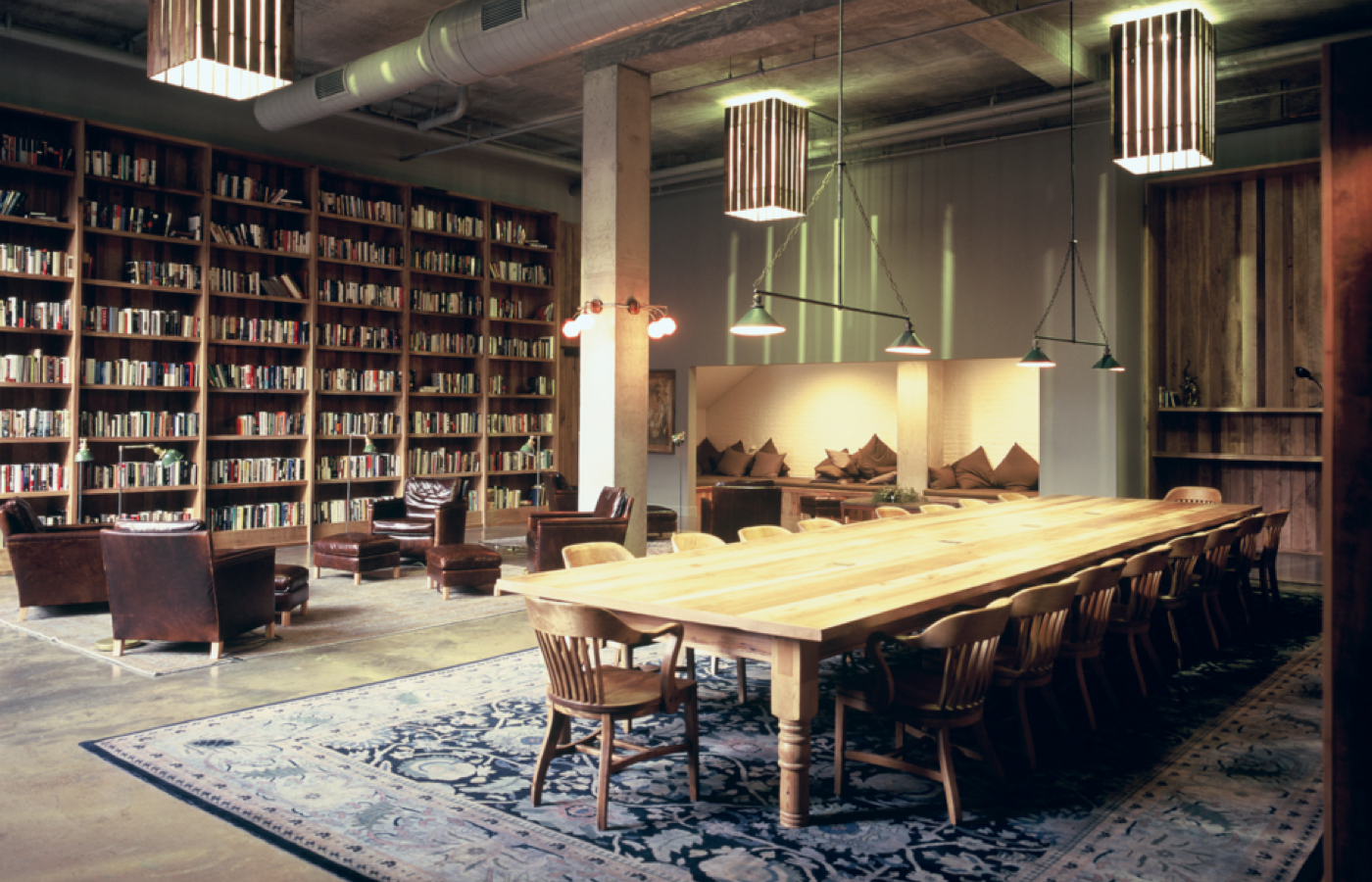 Office technology and design are constantly evolving, and this year’s hot new thing could be next year’s fax machine. With that in mind, Robin brings you The State of the Office 2018—a series of in-depth articles detailing how innovations in technology and design are changing various aspects of the workplace, and what everyone from CIOs to office managers needs to know to stay current. Each week, we’ll issue a new report focusing on a different section of the office. This week: amenities spaces.

Despite what Silicon Valley legend would have you believe, most office amenities are designed to make employees happier and more productive. Which means, yes, that ping-pong table is actually useful. The following amenities, though, aren’t only beneficial in the confines of your office—they’re crucial in attracting talent and maintaining employee satisfaction. They’re the kinds of amenities that modern workers have come to expect. And they’re increasingly made possible by technology.

Explore 5 amenities that are increasingly made possible by technology.

Google conducted interviews with nursing women to create the ideal 24/7 lactation rooms. Photo via ELLE.[/caption]The Affordable Care Act, passed in 2010, stipulates that employers must provide new mothers with “a place, other than a bathroom, that is shielded from view and free from intrusion from coworkers and the public, which may be used by an employee to express breast milk,” according to the Department of Labor. Eight years later, not every company has a dedicated space, and stories of less-than-ideal spaces for mothers abound. But the companies that do have lactation-specific rooms are ahead of the curve in catering to new mothers in a country with no paid parental leave.Two years ago, Elle showcased the best lactation rooms at offices around the United States, including Cisco, General Mills, and PricewaterhouseCoopers.

At Google, where an increase in paid maternity leave cut the rate at which new mothers quit by 50%, each 24/7 lactation room is equipped with a hospital-grade Medela breast pump, cleaning items, a comfortable chair and footrest, and other necessities.

Marriott’s lactation rooms have multi-use Symphony pumps. New mothers at Cisco are eligible for a $100 credit toward a Medela pump.For guidance on building a lactation room at your company, the National Business Group on Health created a toolkit called “Investing in Workplace Breastfeeding Programs and Policies.” Facebook used the guide to create its mother’s rooms. Below are other resources:

Weebly’s gym is covered in graffiti, paying homage to the building’s history as a San Francisco rave venue. Photo via Office Snapshots.[/caption]The logic behind designing in-office fitness centers can no longer be “find the darkest corner of the building and hope people show up,” said Keating Crown, a principal at Sterling Bay, a developer that built Google’s Chicago headquarters. Employees expect more than a couple treadmills and a set of dumbbells. They want real, serviceable gyms with ample natural lighting; a variety of free weights, machines, and cardio options; and, ideally, more spaces that promote health and fitness but don’t necessarily fall into the “gym” category. Apple Park, Apple’s extravagant and spaceship-like new headquarters in Cupertino, Calif., has a 100,000-square-foot fitness and wellness center with a two-story, stone-covered yoga room. Software company SAS has a 900-acre campus with health and wellness bona fides including a swimming pool, fields and courts for every sport imaginable, and a 73,000-square-foot fitness center used by nearly three-quarters of employees. ExxonMobil has a basketball court. TripAdvisor has an outdoor amphitheater for warm-weather yoga classes. Clif Bar has a 40-foot bouldering wall. Nike has, well, everything.Of course, it’s easier to build creative and costly fitness spaces in your office if your company is a mega-successful global juggernaut. But innovative companies across industries, revenue numbers, and the globe are outfitting their offices with more than just a dingy gym that wouldn’t pass muster at a two-star hotel.Take inspiration from Kimpton Hotels & Restaurants, for example, whose fitness center has a bouldering wall and monkey bars in its gym. Or Weebly, whose gym is covered in graffiti inspired by the neighborhood in which the office is located. Or Bizible, with a bright yoga sudio. Or Alterra, a Utah-based company that sells pest-control services, which has an NCAA-regulation-size basketball court and a TruGolf simulator. Inspired by Zappos CEO Tony Hsieh’s prioritization of employee happiness, Alterra CEO David Royce began investing more than 10% of the company’s profits in perks for employees. The move has paid off handsomely.

Employees who’ve come from Alterra’s competitors increasing their sales by 70% in their first year at Alterra.

Head down to the saloon-inspired bar for a drink with colleagues at VICE’s Toronto headquarters. Photo via Officelovin’.[/caption]While you surely know that bars are places of spontaneous interactions and conversations, you might be unaware that it’s not entirely because of the booze. It’s because people who sit and stand are at the same eye level, thanks to bars’ counters and stools placed at a matching height between 40 and 42 inches. Installing bar-height tables in your office, like those from the Herman Miller Exclave suite of products, can facilitate the exchange of ideas between employees who might not otherwise interact.But some companies are taking the idea that offices should be more like bars one step further. Reflecting the company’s irreverent, millennial ethos, VICE’s Toronto office has a saloon-inspired bar with marble tabletops and zinc surfaces designed to get scratched up over time. At the New York City office of Ceros, a content-creation platform, the company’s fun, collaborative culture is demonstrated by its authentic British pub—draft beer and all. “The Pub is the heart and soul of Ceros,” said creative director Jack Dixon.

“It’s a great place to retreat to during the day if you need a little peace and quiet, and in the evenings, it becomes a really cozy environment for unwinding with your coworkers.”- Jack Dixon, creative director at Ceros

Spotify employees can use their Manhattan office’s library as a quiet refuge—and to feel like they’ve traveled back in time. Photo via Mashable.[/caption]An in-office library can help a company expand its employees’ knowledge and education, of course, but also convey its workplace ethos and brand narrative. Kickstarter’s Brooklyn office has a massive library with double-height floor-to-ceiling shelves and worn-in leather chairs that invite quiet contemplation or productivity. The library at Spotify’s Manhattan office has Victorian-esque details. At SAS’s North Carolina campus, the library has 10,000 books.At TheSkimm’s office in New York City, there’s an “overflowing library that, through its diverse titles, neatly illustrates the unique tone and style of the company’s fast-growing daily newsletter,” according to Gabe Marans of commercial real estate company Savills Studley. “Diversity of thought is a clear driver in the space,” he said, noting that TheSkimm employees get inspiration for stories and events from the ever-expanding book collection.

A Thrive Global employee takes a quick cat nap in the office’s space-age nap pod. Photo via The New York Times.[/caption]Just like smartphones, employees need to regularly recharge in order to keep working smoothly and efficiently. Unlike smartphones, however, employees can’t just plug themselves into a power outlet, wait a few hours, and be good as new. (Not yet, anyways.) The most progressive companies are taking this into account, equipping their offices with spaces and amenities designed to help employees unwind, relax, and even sleep.

Yes, sleeping on the job is no longer a fireable offense. In fact, at some progressive companies, it’s encouraged.

Arianna Huffington, whose wellness company Thrive Global has a nap room, thinks “recharging rooms” will be “as common as boardrooms” in the near future. Ben & Jerry’s, Betterment, and Orangetheory Fitness are just a sampling of the many companies with in-office nap pods or rooms. Even hammocks, a symbol of breezy, carefree relaxation, are popping up in offices around the globe. The “quiet room” at WeWork’s Manhattan headquarters has hammocks and walls painted like a verdant forest, while HubSpot’s Dublin office has a small room with a hammock and walls painted with fluffy, sunny-day clouds. Napping during the workday has become so popular that there are now companies like Nap York offering nap rooms—or luxury hotel rooms, in Recharge’s case—that can be booked in small, flexible time increments. The MetroNaps EnergyPod, which has a privacy visor and built-in speakers and retails for—deep breath—$13,000 is popular among companies like Google, the Huffington Post, Zappos, and the Savannah College of Art and Design. For companies based in the United Kingdom, Podtime offers versatile, futuristic-looking nap pods. But maybe your office already has a nap pod. (If so, well done!) Perhaps, then, you should be asking yourself: Is floating the new meditation? Dan Harvey, who works with Silicon Valley companies as vice chairman of CBRE’s Bay Area group, thinks that offices of the future might embrace “sensory deprivation tanks and things that help staff reach this ‘state of flow’ that everyone is talking about.”

People who have tried out sensory deprivation tanks, in which a person floats in heavy salt water in a large tank sealed off from external sensory input, say the experience brings about everything from intense relaxation to hallucinations and a feeling of being reborn multiple times over.

While flotation tanks have yet to become de rigueur in the modern office, we’ve certainly come a long way from the windowless cubicle farm of yore. Our forebears might scoff, but plenty of data shows how new office amenities have contributed to a more efficient and proficient workforce. Or maybe it’s just that we’ve aged out of the two-martini lunch.

With all of these areas taking up real estate, where does the traditional C-suite office fit in? Find out in the next post of the series: executive offices.Check out the other posts of The State of the Office 2018 series: