The State of the Office: Conference Rooms 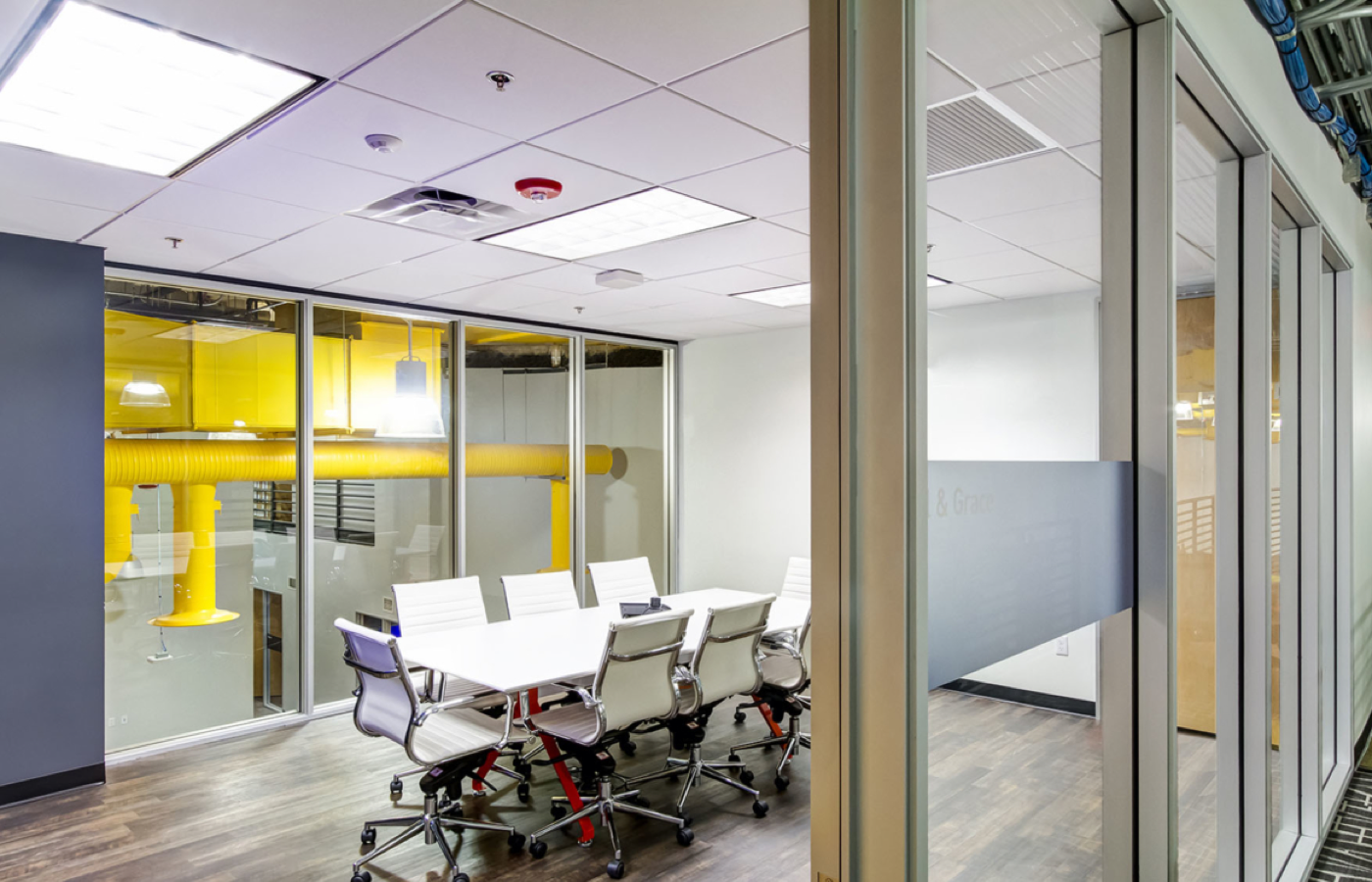 Office technology and design are constantly evolving, and this year’s hot new thing could be next year’s fax machine. With that in mind, Robin brings you The State of the Office 2018—a series of in-depth articles detailing how innovations in technology and design are changing various aspects of the workplace, and what everyone from CIOs to office managers needs to know to stay current. Each week, we’ll issue a new report focusing on a different section of the office. This week: the conference room. [caption id="attachment_5262" align="aligncenter" width="1920"]

Who could forget the sub-optimal conference room in The Office? Photo via Bustle.[/caption]If you’ve ever seen the cult-classic TV series The Office, you know just how many unproductive meetings happened at Dunder Mifflin Paper Company. Though The Office may have been fictional, and its hideous, uninspiring conference rooms just part of a Hollywood set, every office worker knows the feeling of leaving a meeting and immediately thinking, “What a huge waste of time.” Maybe the video camera didn’t work, or the room was so small that the all-hands meeting became a some-hands-now and some-hands-later meeting. These inefficient meetings are costly—not just to a company’s bottom line, but to employees’ focus, morale, and overall well-being.In the past, conference rooms had two relatively static and specific use cases: impressing visitors and holding large staff meetings. The standard conference room design was a large, likely square table surrounded by chairs; a whiteboard hung on a wall, perhaps, and a bulky television sat in a corner. Now, however, conference rooms must be more space-efficient, flexible, and technologically adept to fit into a global workplace in which physical barriers have been collapsed by the internet, resulting in more time spent in meetings than ever before.

Collaborating with a team member thousands of miles away? Video meeting. Call with a client in another time zone? Phone meeting.

BIG IDEA: The stakes for companies having inspiring, useful meeting spaces have never been higher.

We spoke to IT specialists at ClassPass, a fitness subscription service, and Zenefits, an HR software provider, to identify three major trends that have kept the meetings in their conference rooms productive. Behold, the technology trends that cut across company size, industry, and office type:

Mixing work and play: an efficient use of space in a ClassPass conference room. Photo via Homepolish.[/caption]We found that a majority of meetings in 2018 have only two or three people. This should come as no surprise. Smaller meetings lead to faster decision-making, a fact that, coupled with more employees working remotely, means conference rooms are shrinking in size. A meeting room’s layout and amenities must be thoughtfully, carefully designed and implemented to accommodate one-on-one check-ins in addition to follow-up huddles, creative brainstorming sessions, and departments’ all-hands standups. Adaptability is key.Instead of a standard conference room’s rectangular table, forward-thinking companies might have a curved or teardrop-shaped table so everyone at the meeting—or follow-up huddle, creative brainstorming session, or whole-department standup—has an unobstructed line of sight. They might vertically stack monitors to improve ergonomics and enable employees to see the screen no matter where they’re sitting or standing. Their conference-room walls might function as whiteboards, with every surface a potential locus of creativity. Foursquare, collaboration space LMHQ, and digital agency Wpromote are just three companies whose conference-room walls are covered in Idea Paint, a versatile dry-erase paint available in a variety of colors. Topher Wheeler, an IT manager at ClassPass, put it succinctly:

Seamless teleconferencing technology helps Zenefits save time and money. Photo via Zenefits.[/caption]As employees’ exact whereabouts become less important, technology has enabled some companies to go fully remote and conference rooms have become spaces for digital “meetings.”“[Using conference rooms] is necessary in this day and age with teleconferencing,” Wheeler said. “We have definitely seen productive teams be able to work like they’re side by side, even though it doesn’t matter if they’re on vacation or at home or in a different office.” But getting teleconferencing equipment to function properly has long been an IT headache. At Zenefits, employees used to have to sit within 15 feet of a TV if they wanted to be heard by the person on the other side of the screen, said Mike Schultz, the company’s IT support engineer. There was no mic system, and the camera quality was subpar.“We went from a small startup to something real when we made the change in terms of video conferencing,” he said. Today, Zenefits’ conference room is outfitted with two 90-inch TVs, Cisco products for phone and video calls, and an Amazon Kindle Fire tablet that shows all upcoming meetings. Each of ClassPass’s 30 conference rooms across its offices has two TVs, Jabra microphone and camera systems, a Chromebox powered by Google Chrome and Hangouts, and Apple TV. Both companies are set up for any kind of connection to happen, from a spontaneous audio call to a planned group chat via video.“This kind of visibility allows people to not think about distance and geography so much,” Wheeler said. It’s how ClassPass keeps their teams connected and collaborative. “It’s vital that this stuff works,” he added, because “we’re definitely a company that focuses on output and success, not really how that’s achieved.”

A smart conference room system just makes life easier for everyone. Photo via Robin.[/caption]Even as some companies make in-office meetings a thing of the past, for most employees, meetings are a frequent, even daily, reality. And lots of meetings can create a scheduling and space headache for IT managers, especially at companies quickly outgrowing their workspace.“As with any startup, conference room space is always at a premium,” Wheeler said. “We require people to check in because spaces are limited and if people aren’t using it, we want to give that space back and free it up for other people.”Having a system that enables seamless conference-room booking, updates the room’s schedule of availability, and integrates with a company’s calendar is utterly necessary. And it will only grow in importance as activity-based work, in which there are no assigned seats and employees have the autonomy to move between work settings depending on the task at hand, grows in popularity.

BIG IDEA: Making use of a tech-enabled system needs to be an afterthought for the employees organizing the meeting.

The days of having an A/V technician set up every video or phone meeting are long gone. “We don’t want any lost work or lost time spent having to do something,” Schultz said. “You want the meeting to take place at relatively the same time it’s scheduled.”The chance of starting a meeting on time is much higher when systems are synced across devices—meaning if a meeting is scheduled on a wall-mounted tablet outside the conference room, the same meeting should also appear on the calendar system used companywide. Merging calls and sharing content should be able to happen at a moment’s notice. Meetings should begin when they’re scheduled, not when someone finally figures out how to turn the monitor on. Companies that remove this grunt work from facilitating meetings—swapping cables, finding extra chairs, hunting for the TV remote—help their employees reclaim valuable time. Time is money, but so are the best ideas. More time means more opportunities for those “aha!” moments. Or, at Dunder Mifflin, at least, more time to figure out what the heck Dwight is doing.

There's more to the office than just conference rooms. Up next: the impact of a well-designed and well-equipped lobby. Check out the other posts of The State of the Office 2018 series:

And download our free guide to get access to the tech throughout every corner of the office.sources: The Wall Street Journal, Homepolish, Herman Miller, Mashable, IdeaPaint, Zenefits, Zapier, Cisco, Amazon, Jabra, Apple, The New York Times, Veldhoen + Company