The state of the office: Social areas 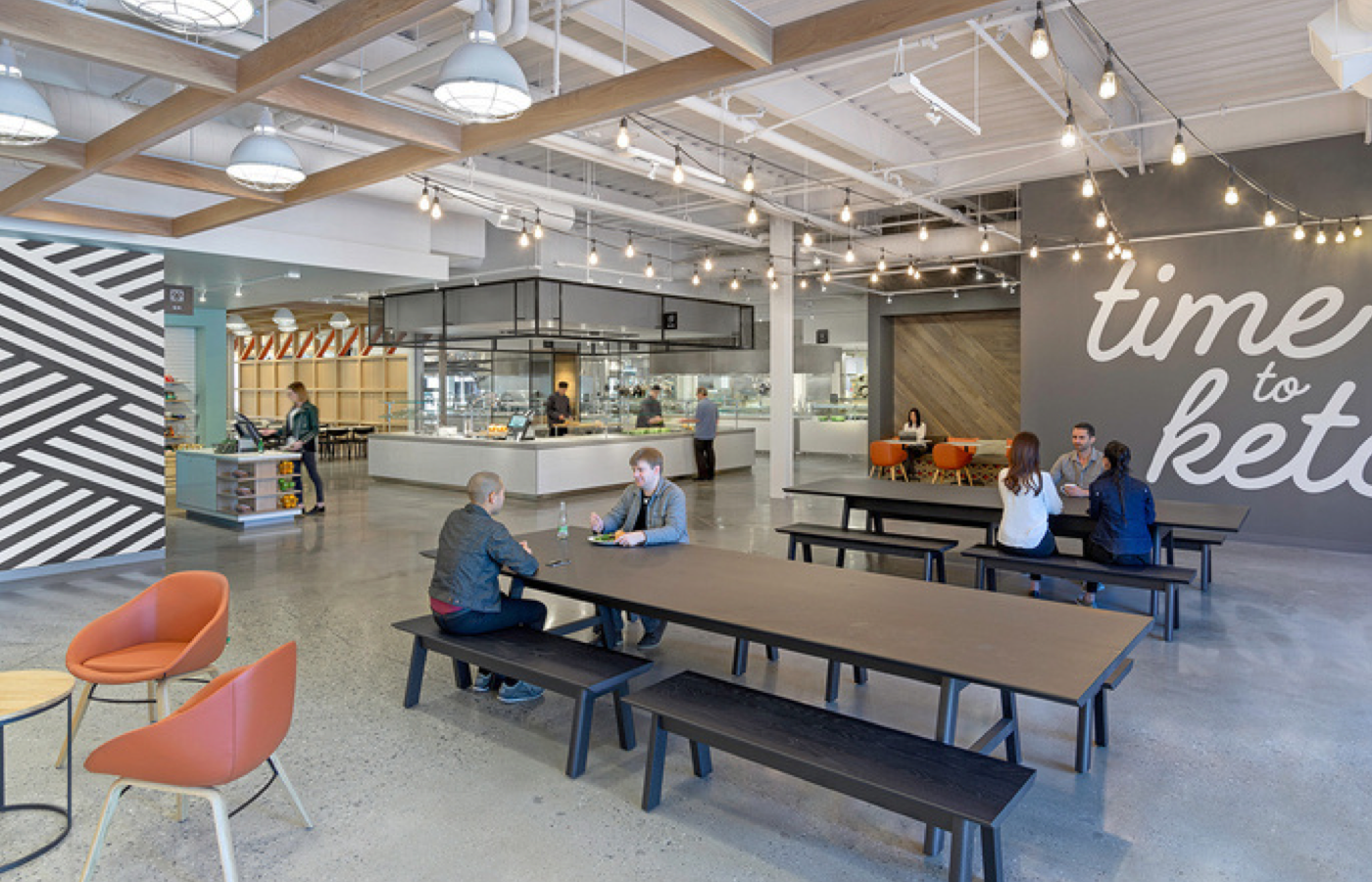 Office technology and design are constantly evolving, and this year’s hot new thing could be next year’s fax machine. With that in mind, Robin brings you The State of the Office 2018—a series of in-depth articles detailing how innovations in technology and design are changing various aspects of the workplace, and what everyone from CIOs to office managers needs to know to stay current. Each week, we’ll issue a new report focusing on a different section of the office. This week: social areas.

If you work at Facebook, you can walk upstairs to a verdant rooftop garden and order a bee pollen-infused green juice from the on-staff barista. If you’re stressed out and also employed by Infosys, just take a stroll to the in-office bowling alley, roll a few frames, and feel rejuvenated. (Hopefully.)

Or perhaps you’d like to unwind with a cold one shipped directly from Ireland down at the pub… in your office, if you work at New York-based Ceros.And you thought having a ping-pong table was cool? In the never-ending battle for skilled workers, companies are no longer just differentiating themselves with their products or services. With the C-suite prioritizing employees’ happiness and productivity, they’re touting their office’s social areas, too.

Below, we explore four types of offices’ social areas that are being improved by advancements in design and technology—resulting in happier, more productive employees.

Office cafeterias were once dingy, fluorescent-lit spaces where employees would do little more than drink stale coffee in the morning and eat their brown-bag lunches three hours later. Some still might be. Now, progressive companies are seeing that cafeterias and kitchens serve as much of a social function as a sustenance one. The basement of Twitter’s New York City office features a speakeasy-style, Art-Deco café with a coffee bar, plush leather seating, and a Ripple Maker, which “prints” latte-art designs.

Upstairs, the cafeteria uses large wall-mounted screens to help employees stay informed about worldwide Twitter trends. At Twitter’s Bay Area headquarters, meanwhile, the main cafeteria known as #theperch does double duty as a space for events and large meetings. Large acoustic panels hang from the ceiling of the cafeteria, which opens onto a half-acre roof garden, a popular gathering place.

Next door to Twitter lies Square, the point-of-sale app led by a co-founder of Twitter. Square's massive headquarters is designed like a city, with a main “boulevard” connecting the entire office, “civic” landmarks like a library and gallery, and a central coffee bar that functions as a “town square,” where employees mingle and collaborate -- but only employees. The coffee bar is used for beta tests for new Square devices, so it’s closed to the public. Square’s cafeteria, too, is multifunctional. Large enough to hold the entire company, it hosts a weekly company-wide “town hall” meeting.

While these amenities may seem more focused on design than technology, it’s the underlying tech that makes them sing.

Installing high-def displays in large-scale gathering places like cafeterias, as Twitter does, is an easy way to improve your office’s accessibility. With screens featuring the office calendar with room availability, employees can more easily find each other at the right time and meet in the right place. Alternatively, rolling TV carts can create flexible, pop-up presentation spaces in high-traffic areas like cafeterias and kitchens.Another company improving employees’ cafeteria experiences with technology is Nvidia. According to The Economist, cameras at Nvidia’s new headquarters will “recognize what food people are taking from the cafeteria and charge them accordingly, eliminating the need for a queue and cashier.”

A research study from design agency Interface found that workers in offices with natural elements, like greenery and ample natural light, have a 15% higher level of well-being, are 6% more productive, and are 15% more creative.

With that data in mind, forward-thinking companies are accounting for people’s innate biophilia—their connection to nature—when designing offices’ social spaces, especially in locations where access to nature is limited.The Tokyo office of advertising agency TBWA Hakuhodo, for instance, emphasizes biophilic design by including dozens of tree plantings and artificial lawns strewn with comfortable pillows, offering employees a soothing place to relax and meet.

‍Skype’s Palo Alto office has patches of artificial grass with gray “rocks” that are actually cushions. Kickstarter’s Brooklyn office has a solarium, a tiny river that fills when it rains, and a rooftop garden that resembles a miniature public park.In Google’s Chicago office, employees can change the color temperature of their task lights to simulate the full-spectrum light of sunshine, which affects employees’ mood and stress levels. Google continues to experiment with biophilic design changes in its offices, like adding solar tubes to interior conference rooms to flood them with natural light.

Stairs aren’t just for walking anymore. Bleacher-style seating on one side of a stairway’s thoroughfare has transformed them into spaces for everything from eating lunch and taking phone calls to holding meetings and having impromptu chats between employees.The former Silicon Valley headquarters of Evernote were on one floor, but in moving to a new space, designed by Studio O+A, “there was a lot of discussion about how to get interaction between floors,” according to Denise Cherry, a principal at the interior-design firm. Evernote’s current office features a wide staircase with banks of cushioned steps for seating to encourage spontaneity.

“It’s kind of understood that you’re not supposed to use the elevators.” - Denise Cherry, Principal Interior Designer at Studio O+A

At Ogilvy & Mather’s Jakarta office, one side of a staircase has colorful seating, the other a playground slide. At Google’s Chicago office, most employees eschew the elevator to take and linger on the “conversational stairs.” Razorfish, Slack, and Yodle are just three of many other companies with large, centrally located staircases that serve as meeting and hangout spaces.

As more time is spent online, spaces that foster face-to-face connection are increasingly valuable. The office commons—a space with a different vibe from work-only areas, with features like cozy couches, bar-height stools and tables with built-in charging ports, and low coffee tables—has replaced the break-room water cooler as the new social hub. As Marlyn Zucosky, partner and director of interior design at the design firm JZA+D, said, “[T]he shared functions of copy room, dining area, pantry, and laydown space can be clustered to create a commons, or the so-called ‘downtown’ of an office floor.” At the New York City office of Morningstar, an investment research firm, open spaces with couches and chairs around coffee tables are kept intentionally casual to spark direct and informal interactions with clients.

“Their clients are literally immersing themselves within the world of Morningstar.” -John Sadlon, Principal at Perkins+Will

Amazon’s head of real estate, John Schoettler, said he wants communal areas to be “living-room-like spaces.” The consulting firm Accenture has similarly open social areas, but its combination of technology and thoughtful design stands out. Accenture’s Dublin office, known as The Dock, is an office space from the future. The Dock’s 10,000 sensors are connected to an Internet of Things platform that helps employees understand how and when the building’s spaces are being used. Its light-filled communal spaces are flexible, enabling employees to create custom environments—think workspaces built on wheels, outlets that hang from the ceiling, moveable interactive screens that respond to gestures and touch, and modular furniture.

Ellyn Shook, Accenture’s chief leadership and human resources officer, called the office “smart,” noting its “interactive digital screens that respond to gestures and touch.”As companies focus on employee happiness and productivity more and more, office designers and CIOs will continue to expand the limits of what’s possible in these kinds of social areas.

Social areas are great for collaboration, but where do you go when you need to put pen to paper? Up next: pods.